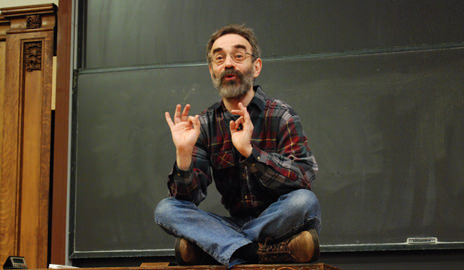 Three of the top five online courses in China are Open Yale Courses (OYC), according to a recent article in the Southern Metropolis Daily of Gaungzhou.

The article notes that, while they have only gained popularity in the past year or two, “Open courses from foreign universities have quickly captured a lot of fans in China” — with ones such as Yale’s “Death” garnering click-through rates of more than a million. Many Chinese students who plan to study abroad “take advantage of foreign open courses as a warm-up,” using them to improve their English language skills and familiarize themselves with the material they will be studying, notes the article.

In describing the course on “Death” for its readers, the Southern Metropolis Daily article notes that during his lectures, Kagan “sits on the podium with his legs crossed, as if he were a monk preaching religious texts. This resembles those intellectuals in ancient China who used to sit cross-legged and talked about Tao.” It also warns that the course is “not a Chicken Soup of the Soul” but is a serious philosophy class involving “some relatively difficult vocabulary and logic, so the listener needs to be mentally prepared.”

Noting that “the Chinese people clearly love music,” the article describes Wright’s “Listening to Music” course thusly: “The class aims to teach you how to appreciate music, and cultivates a sense of music based on understanding of western music. … Wright also teaches how to listen to works of great musicians, such as Beethoven, Mozart, and Bach. This is absolutely a top-level course that can’t be missed by music lovers, especially classical music lovers.”

Of the “Roman Architecture” class, the article writes: “In her introduction of city architecture, [Kleiner] also includes knowledge on the history, culture, and life of Italy, which provides a good way to understand Roman culture through the angle of architecture. To many people, it is after all not easy to travel to Italy and experience the charm of Roman architecture in person. Now that we have watched open courses that are so professional, should we have a chance to visit the real sites in future, we could regard this as an ideal preparation.”

The OYC program now features 42 online courses on a wide range of topics in the sciences and humanities — from African American studies to chemistry, economics, English literature, history, physics, religious studies, and more. The content for each of these courses is available for free to anyone with access to the Internet. Each course is recorded in its entirety as it was presented to Yale College students, and is taught by a distinguished Yale faculty member. There is no registration required, and the courses are not for credit.